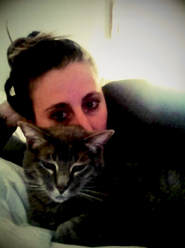 Born in 1985
Lives and works in New Orleans, LA

Artemis Antippas was born in 1985 to Greek-American parents; an abstract painter mother and an art dealer father. From a very early age, Artemis became consumed with the wildness that is New Orleans, especially the French Quarter where she grew up. She graduated from American University in 2008, where she received her BA in Public Communications and Art History.

Since 2014, Artemis has exhibited her work throughout the country including Brooklyn, NY, Boulder, CO, Lake Charles, LA, and Washington, DC, as well as several exhibitions in New Orleans including the Ogden Museum of Southern Art, the Contemporary Arts Center and multiple Prospect satellite exhibitions.

Artemis makes work that is a reflection of her intense connection to New Orleans and her various obsessions – obsession with color, glitter, fried chicken, with her grandmother, with soccer, dollar store foods, her cat, with New Orleanians' unrelenting tendencies of fête and food, with multiples, old lady things, party decorations, apparel & accessories, with carpeting, Mardi Gras, cotton candy,   shopping, fur, and with all things Greek.

Artemis' practice revolves around these obsessions, personal interests and daily observations. For her, the adventure and experimentation of the working process are equally as exciting as the finished work itself. Artemis Antippas lives and works in New Orleans, LA.
​